I am sure most of you noticed (either quietly or bragging it to everyone) some positive differences in bed, since you started BJJ.
Well, It’s not just in your head, but scientifically proven.

Better understanding first the different elements that make up a great sex performance:

Hormones: The main stress hormone, cortisol which regulates, like a central machine, the levels of your sex hormones, for men testosterone and for women progesterone and to a lesser extent oestrogen
Neurotransmitters: brain chemicals that allow signals to pass from one nerve cell to the next.

-Dopamine, also called the “craving neurochemical” it stimulates the pleasure/reward system. It affects movement, emotional response and your ability to feel pleasure. Less= no pleasure, no motivation; too much= anxiety. It’s naturally made from the amino acid tyrosine which is high in meats, dairy products, and nuts and seeds. Vitamin B6, zinc, magnesium, folate, iron, vitamins B12, B1, and B3 are all responsible for proper synthesis of dopamine. Many of these nutrients, especially B6 and magnesium, are depleted in athletes.

-Adrenaline activates the sympathetic nervous system, which increases your heart rate and dilates arteries to increase blood flow to your muscles during sex. It also causes a refractory period in which another climax is impossible for up to 20 minutes after sex. During intercourse, increased amounts of adrenaline are released from the adrenal glands. This chemical amplifies the circulatory system with each heart contraction. At the same time, high levels of adrenaline in the body can negatively impact testosterone levels in men.

…and what is bad for your sex:

Depression, anxiety and chronic stress: interfere with central and peripheral pathways of the sexual response, reducing the quality of sexual function mostly in its motivational root. If your body is too sympathetic dominant then you will most likely not be able to get aroused or sustain that arousal because your body is focused elsewhere. [Excess of cortisol & adrenaline = Loss of sex hormones = loss of libido]

Overtraining: Stressing the body induces more sympathetic stress to the nervous system – also called the “fight or flight” system. Rest and recovery are included in the parasympathetic system (Recovery means sleep as well as active recovery, such as walk or easy run, or light mobility exercises) If you do too much of either one then you’ll create an imbalance in your nervous system, and this imbalance will reveal itself when you’re ready to put on the sexy time. Furthermore it lowers the levels of serotonin and dopamine, the neurotransmitters. Additionally those training too hard then deplete their dopamine levels as it’s needed more and more for adrenalin.

Unhealthy diet and sedentary life: connected with poor blood circulation, which instead is key during sex and also to the production and release of serotonin. Poor blood flow and low serotonin levels lead to bad performance and loss of libido.

Why then BJJ makes us better?

1. Sports that balance aerobic and anaerobic activity, such as Brazilian Jiu Jitsu, stimulate in a harmonic pattern all the elements needed for a good sex performance

2. BJJ boosts confidence and libido thanks to the increased oxytocin, serotonin and dopamine. Look HERE for details on these hormones

3. Agility and flexibility garnered during BJJ can help during sex.

4. BJJ help us getting rid of toxins, bad mood and its stress hormone. This as a consequence elevates our sex hormones
Improved muscle tone, endurance, or body composition. Muscles increased activity and improvement, make your body produce more oxygen and enhance the blood flow.

5. Exercise activates the sympathetic nervous system, which increases blood flow to the genital region. And as for women, not only it increases arousal, but it also seems to prime the pump: you will able to get aroused quicker after exercise.

6. Hip opening. Opening up the hips increases circulation, mobility, and agility and you can imagine their effects on your sex life! Furthermore, opening the hip and its muscles are significant for releasing emotions of control. 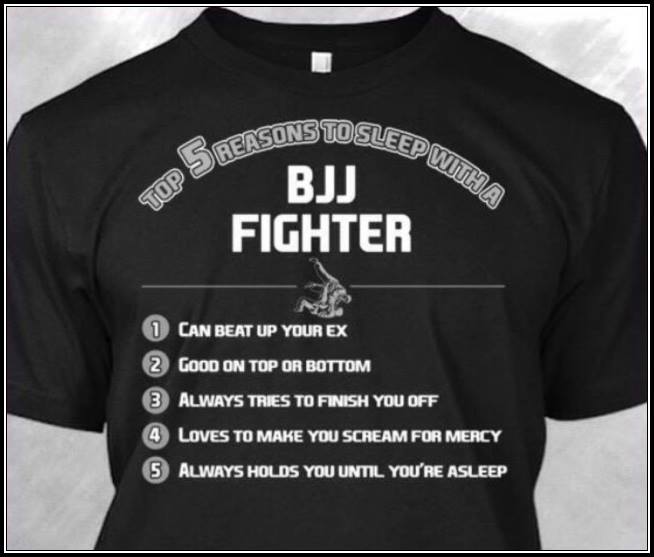 …AND THE ALL WAY ROUND! Sex makes you better in BJJ

It goes the other way too. Being sexually active, (and yeah that can mean going solo), can improve your performance – both your endurance and strength. Sex helps with sleep, and now you have perhaps made the link between parasympathetic-sympathetic-climax-falling asleep. So since proper training needs recovery, sex is a great activity to add in to your training program. And sex will help provide healthy hormonal and neurotransmitter levels which will make you a happier, healthier, faster, and stronger athlete – and it’s drug-free. Now go get some!

NOTICE!! ALL PROFILES WITH INVALID OR NO PHOTO WILL BE AUTO-DELETED WITHIN 24 HOURS.

To cancel, go to www.paypal.com and edit your subscriptions.

Great example of what it’s like when you both train BJJ!!